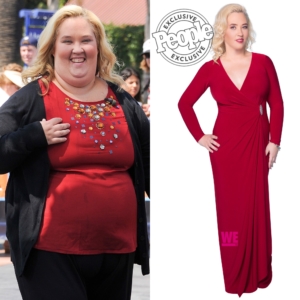 After documenting her weight loss journey on the reality series “Mama June: From Not to Hot,” Mama June Shannon has debuted her new body in a People Magazine spread. The transformation is truly incredible, and Mama June looks like different person, almost unrecognizable from her previous appearance. Once weighing in at 460 pounds, the former “Honey Boo Boo” star has shed 300 pounds.  The 37-year-old lost the weight after undergoing gastric sleeve surgery, combined with diet and exercise.  Mama June also underwent a breast augmentation and lost a combined total of nine pounds through skin removal surgery on her neck, arms and stomach. She spent more than $75,000 on all three surgeries.Months after she was fitted for a gastric sleeve, June underwent surgery to remove excess skin from her arms, back, neck and stomach. Before her final surgery, the 37-year-old reality star—famous for her unhealthy eating habits—joked she might not be the same woman when it was over. “I’m kind of going to miss my turkey neck,” she said. “It’s more famous than I am!” Fame is fleeting, as June well knows. After all, her Georgia-based family first found fame via an episode of TLC’s Toddlers & Tiaras in 2012. (The series introduced viewers to “Go-Go Juice,” a concoction of Mountain Dew and Red Bull mixed in a bottle and chugged before pageant time.) A spinoff, titled Here Comes Honey Boo Boo, followed months later and aired for two years. (It, too, highlighted the family’s unhealthy diet—like “sketti,” pasta covered in butter and ketchup.)June will detail her weight loss journey in the April 17 issue of People (on newsstands Friday). And now that viewers have seen June’s before-and-after body transformation, she’s finally free to leave the house without having to hide from the pesky, prying paparazzi. We hope that Mama June can keep up with her new look and continue to make lifestyle choices that reflect who she wants to be.