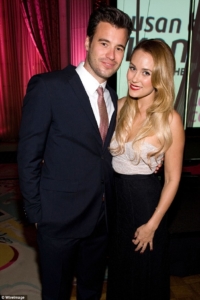 To me, Lauren Conrad is the cool girl in high school that lived the glamorous Laguna Beach life of hot boyfriends, high school parties, trendy fashion, and an overall fabulous life filled with captivating drama. From there she starred in the reality TV Show, “The Hills” where she and her friends navigated young adulthood with all the challenges that come with having a trust fund and life-changing internships. Lauren has now moved past here reality TV days and is a successful fashion designer and here is the big news, a SOON TO BE mother. Lauren posted a picture on Instagram of her holding her sonogram picture.

Lauren and husband William Tell are excited about the new addition to their family! Conrad and Tell got married in 2014.The two started dating in 2013 and were together for about a year before exchanging vows. In a 2015 blog post, the ex-Hills and Laguna Beach actress were asked how many kids she wants to have with her husband. “Maybe two,” she wrote. “That way we aren’t outnumbered.”

Lauren has become established as a real adult and not just a young lady on TV with black mascara and tears running down her face from the latest reality TV drama. She has done quite well for herself. She and her hubby have not been found in any celebrity scandals, but have laid low and that seems to be working well for them. Lauren said this about William, “William hates it when I say this, but he really is a very nice guy, and when you meet a nice guy who also manages to keep your interest, that is the dream,” Lauren previously told Cosmopolitan. “If you’re going to settle down, it should be with someone you can’t stop thinking about.” We hope the best for the little family and that Lauren and William enjoy the adventure that is parenthood.