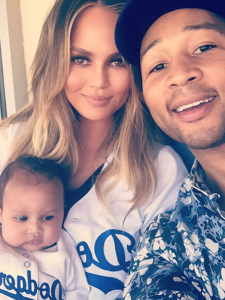 Chrissy Teigen, the wife of John Legend, has opened up about her experience with postpartum depression.

Chrissy Teigen initially had a difficult time becoming pregnant, but she and John were thrilled when they found out they were expecting. Through her experience of motherhood, Teigen is trying to destigmatize the shame and confusion that surrounds what many women feel after childbirth.

After feeling out of sorts for a period, Teigen made an appointment with her GP to explain what she had been feeling and experiencing. Seeking expert advice was the best thing she could have done.

“I looked at my doctor, and my eyes welled up because I was so tired of being in pain. Of sleeping on the couch. Of waking up throughout the night. Of throwing up. Of taking things out on the wrong people. Of not enjoying life. Of not seeing my friends. Of not having the energy to take my baby for a stroll,” she wrote in the April issue of Glamour.

“There are weeks when I still don’t leave the house for days; then I’m randomly at the Super Bowl or Grammys. (This is cringeworthily unrelatable, and I am very aware of that—it’s giving me anxiety.),” she continued. “Physically, I still don’t have energy for a lot of things, but a lot of new moms deal with this. Just crawling around with Luna can be hard. My back pain has gotten better, but my hands and wrists still hurt. And it can still be tough for me to stomach food some days. But I’m dealing.”

I think women of all ages can appreciate Teigen’s honesty. She is not one to beat around the bush or back down from her beliefs. She is a role model for those women struggling with postpartum depression and just a strong female role model in general. Cheers to you Chrissy Teigen. We hope you come out of this stronger and enjoy time with your supportive husband and cute baby.