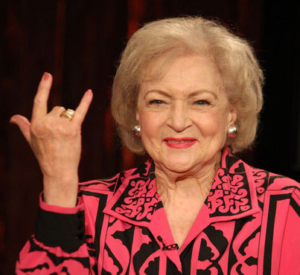 Happy Birthday, Betty White. For you to warrant an entire post because of your day of birth, makes you a pretty big deal in my book. I have always admired Betty White for her quick wit, strong opinions, and general cheery personality.

Betty White has had a successful career. She reached the milestone age of 95 only a couple weeks into the new year. Global News Anchor Katie Couric met with White in Los Angeles to talk about her secrets to a long and vibrant life, her storied career and her positive outlook.

“I just appreciate the fact that people have been so kind to me all these years,” White says. After more than 75 years working in showbiz, she adds, “the fact that I’m still working — that’s the thing I’m most grateful for, that I still get asked for jobs.”

White has seen a lot in her 95 years. Even though White says the country does seem divided, she considers herself an optimist.

“It’s the time to buckle down and work positively as much as you can,” she says. “Just think, ‘All right, there’s nothing I can do about that right now. But I can do my best in my little circle. So if I do that, maybe you’ll do your best and we’ll get through this.’

In 2014, White was awarded the Guinness World Record for “Longest TV Career for an Entertainer (Female).” For White, working for so long has literally paid off. Betty White’s net worth: $45 million, according to Celebrity Net Worth.

Now time for us to take some advice from Betty White on how to live a long and healthy life:

“I’m a health nut. My favorite food is hot dogs with French fries. And my exercise: I have a two-story house and a very bad memory, so I’m up and down those stairs,” White told The New York Times.

And with that last statement, it’s actually very difficult not to like her. Let’s all try to stay positive like Betty!