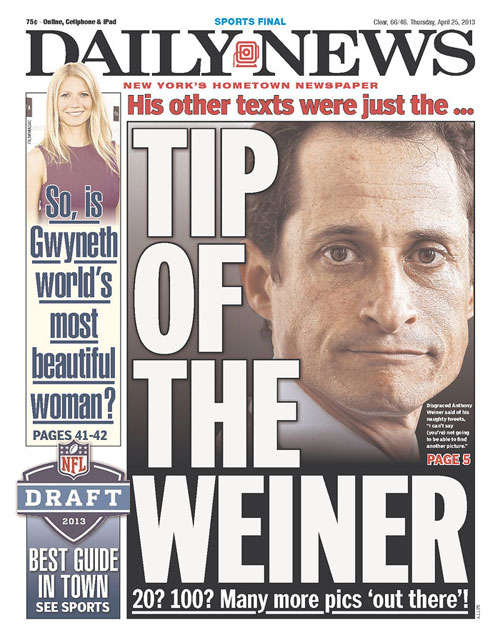 young son sleeping besides him, he is now reported to be sexting with a 15 year-old girl. The Daily Mail broke the story that he carried on a month long affair and she claims he asked her to dress up in ‘school-girl’ outfits for him on a video messaging application and pressed her to engage in ‘rape fantasies’ even though he knew she was underage.
The girl, who’s name is being withheld, says that the online affair started last January before Anthony Weiner’s wife, Huma Abedin, announced that their marriage was over. The girl and her father were interviewed by the Daily Mail and were able to provide pictures of Weiner along with his messages to the girl. Even though Weiner was trying hard to not get caught by using an app that is supposed to delete all your messages once they have been opened, the girl took screenshots of every message.

In this statement to The Daily Mail, Weiner said, “I have repeatedly demonstrated terrible judgement about the people I have communicated with online and the things I have sent. I am filled with regret and heartbroken for those I have hurt.”  He then goes on the further explain that he thinks that he is caught up in some elaborate hoax, “While I have provided the Daily Mail with information showing that I have likely been the subject of a hoax, I have no one to blame but me for putting myself in this position. I am sorry.”

Weiner claims it is all a hoax due to fact that once the girl confided in her father and a teacher of the affair, she wrote a letter claiming that she lied about all the sordid details of the affair. This letter,the girl claims, was actually written at Weiner’s request once he found out that she had told people what was going on between them.

The family is choosing to not press charges because they are worried about the girl’s mental health. The father agrees that her mental health is fragile right now and they do not want to make it worse by contacting the authorities. The girl’s father said, “She’s gone through some depression, we’ve sought counselling and been able to help her work through it,” he continued by saying,  “She’s a bright girl, very smart, so this has somewhat dulled the light that she had previous to this…it’s gut-wrenching to see somebody take that away.”

He is literally on track to be the 2016’s worst man of the year. Even though he keeps getting caught sexting and has been publicly embarrassed and shamed by this behavior, he continues on. We understand why the parents don’t want to go to the authorities but we wish they would. Well, here’s to seeing more scandals with this guy in the future!

After many years of publicly humiliating himself due to his sordid and illegal extramarital affairs, Anthony