Alaska State Troopers responded to a home in Wasilla last Friday after there was a report of a disturbance at the residence. When the investigators showed up at the house, they discovered that Track Palin had assaulted an unnamed female acquaintance. When she tried to call the police, it was reported that Track took the phone away so she was unable to call. When he was placed under arrest, he resisted arrest. According to the report, he was charged with fourth-degree assault, interfering with the report of a domestic violence crime, resisting arrest by force and disorderly conduct.

It was reported earlier that the incident involved the mother of his child, Jordan Loewe. He allegedly hit Loewe on her neck and head. Court records show that on Monday, she filed for a a request for a short-term protective order against Track. She was granted the protective order on Tuesday. She also filed a petition for a long-term protective order, which would last longer than 30 days and a hearing for the long-term order was scheduled for later this month.

It has been less than a year since his last arrest for domestic violence. Last December, he was arrested for attacking his father. His mother Sarah called the police and told them that she believed her son had taken some kind of medication and was freaking out. When police arrived during this incident, they found Track walking erratically around and his father was bleeding from his head. Last June, he accepted a plea deal. He plead guilty to one charge of criminal trespassing in exchange for the charges of criminal mischief and assault to be dropped. He also agreed to enroll in a therapy program which required him to undergo drug and alcohol testing.

His first arrest was in January of 2016. The police came to his parent’s Wasilla home and found him “uncooperative, belligerent and evasive,” and his girlfriend was hiding and crying underneath a bed.

He was released yesterday and must were an electronic monitoring bracelet for the time being. This is also not the first time that Loewe has filed a protection order against Track. She received one in 2016 when Track allegedly attacked her while drunk. Loewe isn’t the only ex that has filed a restraining order against Track. His ex-wife was granted a temporary restraining order in December of 2017. 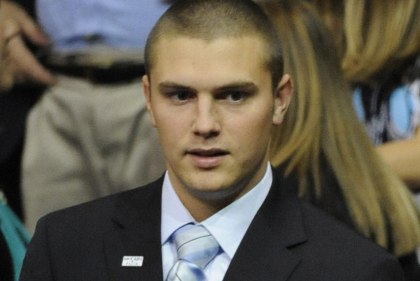