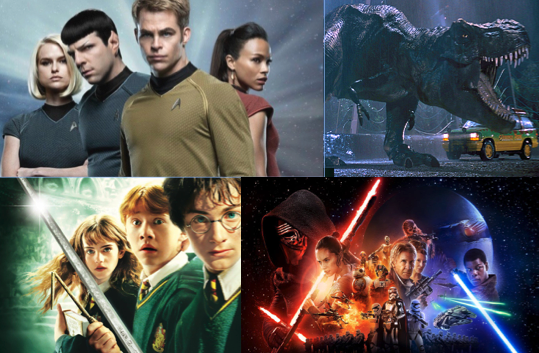 We love movies over here at Celeb Voice. On Valentine’s Day most people want to watch a rom-com but tonight most of us single people plan on having a movie binge tonight on our favorite movies tonight. In honor of all those who won’t be celebrating Valentine’s Day, we are sharing our top four favorite movie franchises that we plan on binging tonight.

“A long time ago, in a galaxy far, far away” … you don’t have to know much to know where this famous phrase is from. Star Warshas embedded its way into our culture like no other franchise has been able to. The movie that almost never made it off the ground, has been one of the most influential cinematic markers of the last fifty years. The movie was created by George Lucasin the late 70’s. With intergalactic war, love, and adventure, the movie captured many audiences. Today, audiences still love the characters, the soundtrack, and the giant yellow letters giving an overview of the storyline before the movie begins. The movie has received many awards to back up the hype surrounding the franchise. It has received ten academy award nominations and won seven. It has also been recorded in the Library of Congress’s’ National Film Registry and the National Recording Registry. We even say phrases like “May the Fourth be with you”, to celebrate the date May 4th. It’s hard to overstate how much this movie has impacted American culture and cinema.

“Live Long and Prosper.” Star Trek was created in the 1960s and had a rough start, being cancelled after only a couple seasons. The show was created by Gene Roddenberry who was a war veteran himself. While the show did not have the booming beginning run, one of the largest letter campaigns to ever be recorded got the show off the ground and back on the air again. It was clear that the writings and themes struck a chord with viewers in ways that other shows had not been able to. The main chord being the idea of coexisting peacefully with people different than you. The show was made during the Cold War where tensions were especially high in America. The show gave people something to aspire to. Since its original debut, Star Trek has made many different movies and shows, sticking to its original theme of inclusivity and embracing differences. In the Star Trek: Discovery, the show features its first openly gay character. Gretchen Bergand Aaron Harberts were the original showrunners. The team of Berg and Harbertsreally took the television show to the next level. Star Trek continues its trend in being relatable to the masses, relating to current events, and staying relevant to its viewers–these qualities can be tied back the long-run of success the franchise has experienced.

Can humans and dinosaurs exist together? Apparently not. This is what Jurassic Parkhas taught us. While the idea of bringing back some of the most powerful creatures that once walked the earth seems like an exciting idea, it also turns out to be one where people across the world enjoy watching it on screen. While a scientist just wanted the world to peak into the past, it becomes clear that we were meant to exist at separate times for good reason. However, getting a cinematic fictional peak into a world where humans and dinosaurs coexist was an absolute hit. In 1993, the movie took viewers by storm. Since then, the franchise has come out with movies that have been just as popular. In 1993, the worldwide box office number came in at a whopping $1,038,812,584. Jurassic Park 3 is expected in 2021.

The boy who lived. The hype and build up to the Harry Pottermovies was born out of the beloved book series by J.K. Rowling. Through friendship, love, and bravery, the books captured the hearts of readers around the world. J.K. Rowling wrote the booksas a single mom who had to file for welfare benefits- -little did she know that her books would become a worldwide sensation. There are eight movies and seven books. Because of the heavy amount of content, it was necessary to split the books into an extra movie. The final book was made into two separate films. To say that the movies did well would be an understatement. The final box office figure for all the film was $7,723,431,572. Harry Potter World, books, trivia, costumes, and a whole fandom was born out of the Harry Potter franchise. While Harry Potter is a newer series in contrast to other franchises that have done comparably well, it doesn’t seem like its popularity will be dying down any time soon. Spin offs of Harry Potter have included The Deathly Hallows, which has gained popularity after the Harry Potter movies finished their final movie. Some might even say that Harry Potter rivals the popularity that Star Wars once held.