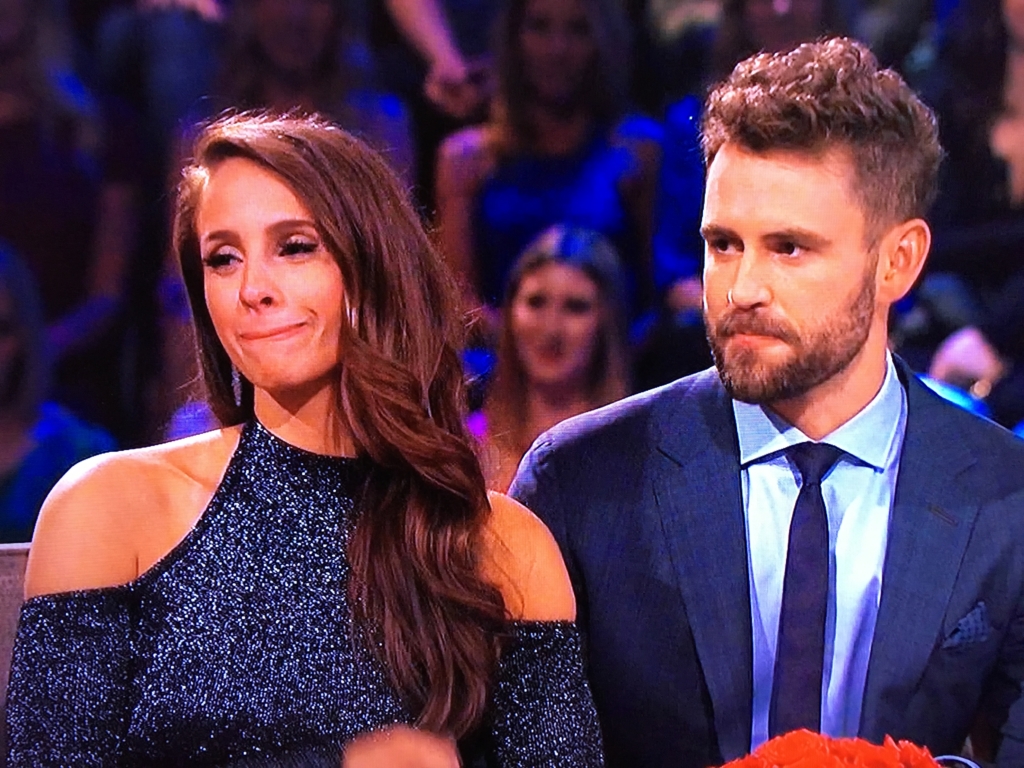 Monday night wrapped up the final episode of the latest painful season of The Bachelor and a winner (don’t know if that is the right word for it) was chosen. And it was the Canadian special education teacher, Vanessa Grimaldi, who won the heart of Nick Viall. The fourth time is the charm because this Bachelor franchise alum finally found the love of his life. The universally panned season finally came to an end and the fans who stuck around to the watch the Final Rose were not convinced that this couple is headed for a happily ever after.

The episode started with Nick sitting down with his family to discuss the last remaining ladies. Mary, his poor mother, starts to get very emotional and begins to cry. We can only assume that she is hoping that Nick will just find someone already and her reality t.v. nightmare can come to an end. After asking him if he had a favorite, (which the answer was no), Nick’s dad summed the experience up pretty perfectly. “Going through this whole process as parents was, at times, excruciating,” says Nick’s dad, bluntly.

Raven is up first to spend time with the family. She had already met them earlier on in the season on a one on one date. The family seemed to like Raven and Nick’s little sister seems to like her the most. Bella, the little sister, asks Raven if she loves Nick and Raven says yes. Bella then states that she hopes that Nick picks Raven. It’s now Mary’s turn and it could not be more obvious that Mary is just over it. The effort she is making however to play along is an Oscar worthy performance.

Vanessa is next and it’s pretty apparent that Nick’s family appears subdued. During dinner, Vanessa recounts the first one on one date where she threw up everywhere and she starts to get emotional. She starts talking about how she has been searching for someone like Nick. She begins to trail off and Nick’s family sits around awkwardly. Thankfully Bella jumps in and rescues Vanessa and scolds Nick for not finishing the story for Vanessa. For someone who has been through this process numerous times, Nick seems completely clueless when it comes to the awkwardness of meeting the family. Both of Nick’s parents have a talk with Vanessa and she asks a ton of questions. Vanessa just wants reassurance that Nick will pick her but Nick’s parents can’t really seem to give her an answer that she is satisfied with. Mary cries again and then Nick heads off to the final dates with each of the ladies.

The first date was with Vanessa to meet Santa Clause because apparently the city of Rovaniemi, Finland, is the hometown of Santa Clause. They take a horseback ride through the woods and of course, Vanessa has more questions about their future. They end up meeting Santa and he asks what they want for Christmas. They both answer love, but instead he gives them a interesting wall hanging with a painting of the two of them along with symbols for happiness and fertility. Nick and Vanessa then continue with date and Vanessa continues with more questions. She pretty much wants an answer now that Nick will pick her.  “I kind of feel like every time I ask you a question, it’s very general — the answer’s very general,” she says like she was unaware that she is on a reality t.v. show with other women to compete for the love of one man. Nick’s annoyance is pretty apparent and says that he will only propose if he feels a love that he has never felt before. When Vanessa asks him if he is ready to propose, he drops the bomb “The week’s not over.” Ugh that was a gut punch. Vanessa cries as Nick attempts to console her half-heartedly.

Well Raven is up next and after watching the excruciating question and barely any answers date with Nick and Vanessa, fans were in desperate need of some lighthearted fun. Raven, during this whole process, has always been pretty laid back. Nick and Raven go ice skating and do seem to have more fun together. After ice skating and a little make out sesh, they head back inside to talk about the future of their relationship. Nick tells Raven he is stressed about the situation but Raven seems unfazed by this. She reassures Nick and lets him know that she is ready to get engaged to him.

Then he meets with Neil Lane to pick out a ring, again. Then it’s off to the ring ceremony and Raven is the first out of the limo. Nick gets to the point pretty quickly but then keep rambling on after he has dumped her. Nick then mumbles through his tears and says “I’m gonna miss you.” Raven’s response is epic, she simply says “I know.” Good for you, Raven. Then Vanessa comes and walks up to Nick and doesn’t say anything. She just stares at him waiting for him to say something. Nick tells Vanessa he’s been falling in love with her since the second rose ceremony and tells her “I don’t want to fight it anymore, because I do love you. I’m in love with you”. She then says “Walking out of the limo, and seeing you for the first time, I knew there was something special and different about you. I thought, ‘There’s no way he’s going to notice me. Instead, you’ve noticed every part of me.” Nick proposes and Vanessa gets the ring and the final rose and then a ride in a horse-drawn carriage into their happily ever after.

Fans however are not convinced after watching the “After the Rose” special that this couple is even happy together. When the couple was finally reunited, there seemed to be tension between the two. Chris Harrison bombards the couple with questions about their relationship and it’s clear that neither of them really have discussed the logistics of their relationship. Vanessa during the hometowns insisted that she would never leave Canada and that he had to see her family at least once a week. Nick, wants to move to LA to pursue a career. When asked where they will live, Nick said that they are “leaning toward the good old U.S. of A.” Nick will be appearing next on “Dancing with the Stars” and this will be the true test of their relationship.

Fans took to social media to express their doubts that the couple was even happy. The seemed tense during the show and didn’t even really seem happy to be there. We are giving this couple at least 4 more months.