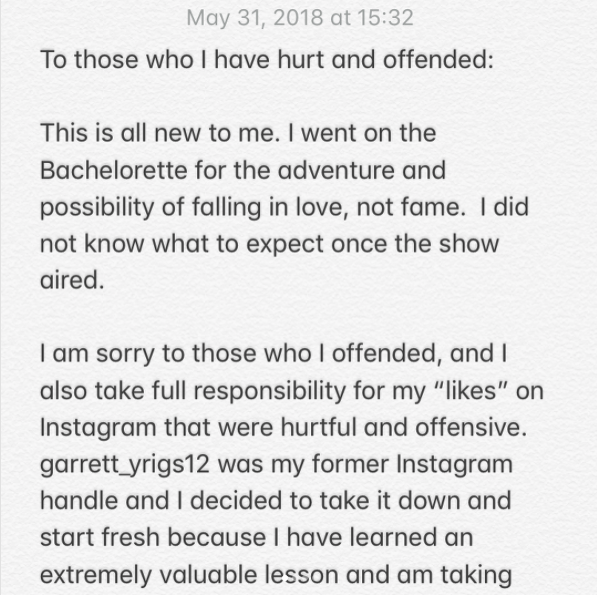 As Nick Viall wraps up this third quest for love, the Women Tell All episode aired this week and we were not disappointed. Especially after the pretty uneventful fantasy suite episodes (except for Raven’s “I just had sex” romp through Finland”, there were many memorable moments during the show. Nick’s group of rejects got together and bared their souls about their quest for the love of one man. Due to all the dramatics, the episode was actually 2 hours long instead of the usual hour long run time. But to be real, this was the Corinne show and once again, she stole the show and made it a cheesy pasta extravaganza.

Before the Corrine show could get started, the ever-host of the Bachelor franchise, Chris Harrison, introduced the previous Nick love interests. As the girls were introduced, it became painfully obvious that half the girls the audience couldn’t remember and to be fair our office couldn’t remember half of the girls as well. Like who is Lacey? She talked a lot but no one could remember any interaction she had with Nick.

After the audience settled down, Liz was the first one to be called to the proverbial hot seat. This girl got raked through the coals for her one night stand with Nick at Jade and Tanner’s wedding. Interestedly enough, Nick was never shamed for the fact that he was also part of that one night stand. It was made out to seem that she went on the show for fame versus being there for Nick. When asked why she didn’t contact him before the show, she said that, “I was in a place in my life that I really, really cared about somebody else, you know, and I needed that period to heal,” she said. By the time she was ready to contact Nick again, he was already gearing up to be the Bachelor. But she said that she felt good about her time and the Bachelor and she was able to walk away knowing that her and Nick just didn’t have a spark. Liz ended up getting a standing ovation from the rest of the girls and the crowd.

Next came Taylor. Taylor, a mental health specialist from Seattle, who is best known for “emotional intelligence” fight with Corinne. There was a lot of contention between the two and it all played out during the Women Tell All episode. Taylor started by saying that in the beginning she was giddy and excited about her potential relationship with Nick. However, once she started to get involved with the drama with Corinne, it all went down hill. Taylor tried to explain her goal in that conversation. Instead of getting people to rally behind her, she seemed to really lose the crowd. She said that Corinne ruined her professional career and that she deserves an apology from Corinne. Jasmine also jumped in to say that Taylor never even got to know Corinne and that Taylor walked around the house with her nose stuck up in the air. Turns out, Taylor was not popular amongst the other girls and it became even more apparent when no one would really come to her defense. A few of the girls tried to jump in but it also fell flat.

Next up was Corinne who then took the show by storm. It is unusual that the typical Bachelor villain ends up being a fan favorite. Even Chris Harrison stated that he enjoyed Corinne and her antics on the show. Corinne got up there and took no prisoners and even though she was blasted for her promiscuous behavior, she gave no apologies. She basically took the stance of “Don’t hate the player, hate the game”. She was out to get Nick’s attention and she did that by any means necessary. The conversation then turned to her nap situation which caused the girls to erupt into a screaming match over how inappropriate it is to nap. Once again, Corinne could care less about what people think about her nap game. Chris Harrison then sort of gets Corinne and Taylor to bury the hatchet. When Chris Harrison asked about Raquel, the nanny, Corinne told a pretty touching story about how Raquel supported her through her mom’s ovarian cancer. Then the audience was treated to Raquel’s famous “cheesy pasta“. The camera zoomed in on Taylor’s face and she had a disgusted look on her face while holding the cheesy pasta.

Next up was Kristina, the Russian angel who’s story brought everyone to tears. They replay the emotional moment when she tells Nick and her time in the Russian orphanage and the time she had to eat lipstick because they had no food, (I’m not crying, you are crying). She then speaks about the walls she had to put up and how hard it was to open up to Nick (You didn’t deserve her Nick, she is too damn good for this show).

Then Nick comes out onto the stage and it’s a pretty anticlimax. The only interesting part that happens is when Lacey (who?) asks if Nick friend zoned her. She wanted to know why Nick talked about other girls to her, and then told him that he shouldn’t talk about potential girlfriends with other potential girlfriends (Did she not know she was on The Bachelor?) The best part of Nick’s whole interview was when he told Alexis that his mom wanted to meet her. Who doesn’t want to meet Alexis the aspiring dolphin trainer?

Rachel the new bachelorette was introduced and she told a standing ovation from the rest of the girls. When asked what kind of man she is looking for, she said she wanted some who was ready to settle down, get married and have kids. Chris Harrison asked about her thoughts about being the first African American Bachelorette and she said, ”  don’t want that to be the focus of my journey, but I’m happy to acknowledge it and I’m happy to be the person to be able to do this, and I’m humbled by the experience, so I’m excited for that.” Well Rachel we can’t wait to see you in May!